I’m not a television person. As a matter of fact, I come from a long line of not television people. I know this because I recently interviewed my grandparents on the subject for a college paper. My grandfather bought his first television with money earned from selling eggs to local businesses. Despite owning a television, it was never a fixture in their lives. They were too busy milking cows and dairy farming. I suppose the TV was more of an accessory than an necces-ory in their lives. Dad still recalls the novelty of family movie nights when everyone gathered in the living room to watch Walt Disney’s Wonderful World of Color.

Dad carried this tradition into my childhood. I have some fond memories of ABC Sunday Movie Special with soft pretzels and bottles of cream soda. I also remember waking up at the crack of dawn for Saturday morning cartoons. I would sneak out of my room before my parents even woke up and switch on the television. Then I would sit there watching static until the programming flickered to life. (Sometimes I wonder if maybe I watched a little too much static as a kid…) I don’t tell this to just anyone… but my favorite show was Darkwing Duck. I idolized that crime-fighting waterfowl and as a three-year-old, I confided in friends and strangers that I aspired to be Darkwing Duck when I grew up… but alas, I’m twenty-seven and I still haven’t any feathers.

Besides family movie night and a few hours of weekend cartoons, I rarely watched television as a kid. My parents could never rationalize the cost of cable and local channels only offered so much programming geared to children. The man I married–however–is a television person. He insists on paying an outrageous monthly sum to cable shysters.

When we detected together last year, he would shout “roundness in the hole!” At the time, I had no clue what he was talking about. I even wrote a post about the absurdity of his ramblings… You’ll be pleased to know that I finally get it! Diggers is now on Netflix and I’ve been doing a little binge watching between wrangling kids, college classes, work, digging, thrifting, blogging, and editing videos for my YouTube channel. I love the show for a number of reasons: 1) I can watch with my family, 2) I can laugh at the gymnastical feats, 3) I can get schooled in history, and 4)  I can rationalize my own overreactions and delight in the fact that I’ve never face-planted…. just to share a few. (Though, there was that time I fell off a gate...)

As I watched the show with my five-year-old, I was struck with the crazy notion to interview George “KG” Wyant for an upcoming assignment in my communications class.  I spoke with my editor at American Digger Magazine and expected Butch to dismiss the idea. Instead, Butch promised to reach out to KG on my behalf. Within twenty-four hours, I had an interview with George. (Butch’s only stipulation was that I agreed to interview both George and Tim in the next few weeks for an article in American Digger Magazine… so make sure you get your subscription!)

After my professor approved my questions, I called George. He missed my first call. A few minutes later, he called back and apologized. He had been changing a tire for his wife. That pretty much summed up my impressions of George Wyant. He is a devoted family man, hard worker, and genuinely nice guy–despite television fame. Talking to him was like talking to a friend. He answered all my questions and then some, despite his busy schedule.

Prior to starring in Diggers on National Geographic Channel, George worked at a copper mine and owned a seamless gutter business. He worked hard all week and reserved weekends for his family. I asked him, “How did you make the transition from working at a copper mine to starring in a television show?” He responded, “Oh yeah, that was kind of weird. It was kind of like every American’s dream… I was born and raised in Montana and I was a hunter and a fisherman. Everywhere I would go, I would see these abandoned cabins and I’d always wonder what’s there. Maybe there’s gold coins over there. From being a hunter, being a treasure hunter came second nature.”

George shared the details of his fateful introduction to Tim “Ringy” Saylor: “Tim moved from Iowa to Montana and I met him through my wife… We started talking about metal detecting and we started researching metal detectors. We thought we’d buy a metal detector and start finding all this treasure. We ended up finding a Garrett GTI 2500, which was the very first machine we owned… We got our metal detectors and went to this old abandoned farm in Montana down on this private property. I know everyone in the valley, so we had permission to go there. We went out there and after about an hour, I found a 1906 Barber dime and I was just amazed. I was like, “Holy Cow, man! This is really exciting. I really found this dime.” Then, all the way back home I would play with it and tease Tim. So, I just got totally enthralled with treasure hunting and metal detecting.” 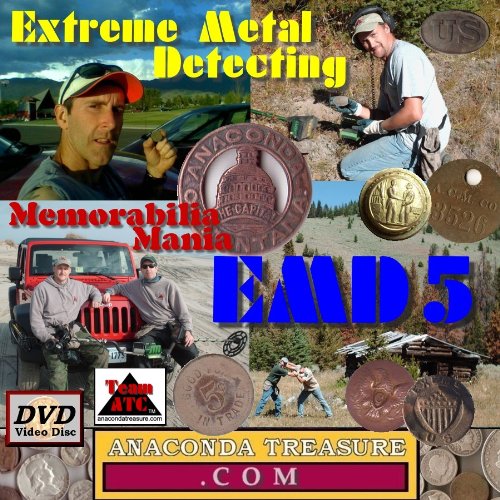 George admitted that, “Kind of everything I do, I just go overboard with. So I started researching and looking for DVDs and books. So I came across this DVD… and I was watching it. It was good, he found some good stuff but it was kind of dry… It was so serious and I’m just not a serious guy. But it was cool, so I called up Tim and I said, “There’s hardly any DVDs out there about metal detecting. We should start filming ourselves. We’ll film ourselves so that if we think we have something good, we’ll look at a camera and that way we’ll get the excitement… all the yelling and screaming. So we did that. We bought a video camera and… formed a company called Anaconda Treasure Company.”

True to his earlier statement, George and Tim went overboard with metal detecting–in a good way. “We started finding all these old tokens and money and rings and jewelry. If we thought we had something cool, we would get the camera. So if it was really cool, we would have genuine excitement. It kind of carries through to the people watching it. We actually made six DVDs an Tim wrote a book. The DVDs are called Extreme Metal Detecting. We would be out there in the winter. The ground would be frozen.” I’m sure most of us can attest to breaking a few shovels in frozen ground.

George revealed his secret to being discovered by National Geographic: “We started putting teasers on YouTube because we wanted people to come and buy our DVDs. If people came and bought our DVDs and we actually sold enough of them, we could earn enough money to buy another metal detector or maybe go on a trip. And we would fantasize, “Could you imagine if somebody paid us to travel and paid us to metal detect?” All these production companies [started contacted us on YouTube]–that’s kind of how they hunt for people… Tim would call me at the [copper] mine and say, “Hey, some TV production company called me.” And Tim thought it was me setting people up to call him.” Play a prank on Tim? That doesn’t sound like something George would do.

Before our time ended and my kids started breaking down the door, I asked George what his advice would be to anyone looking for a job in reality television. “Make sure your wife really loves you.” George answered without hesitation. The show requires him to travel a lot. Similar to a time when George worked long hours at the copper mine, the thing he looks forward to the most is returning home to his family in Montana.

Previous Post:
← Making Friends with Metal Detectors
Next Post:
Why can’t I find this in my yard? →